The room in which Julian Martin works very much alone is one of the most industrious, vibrant and full rooms I have seen. Not particularly large, its paint splattered floors, and walls thick with finished work, are barely visible through the 40 or so people crowded in here with him

As we weave through the tables and easels, many people look up. Some greet us warmly, others beckon us over to look at their work. But Julian Martin, when we eventually reach his place, ignores us.

The 1994 Moet & Chandon finalist, whose pastels on paper now appear regularly in commercial exhibitions, is this morning working on a portrait of Anthony Koutoufides. The large sheet of paper is almost completely filled with an outline of the footballer's head. The huge round eyes, slashes for eyebrows, large mouth filled with teeth, triangular nose, pro-truding ears, helmet of hair, the signature features of a Martin portrait are already in place. In addition, way down in the lower-right corner, and in the perspective Martin obviously thinks they deserve, are the boots.

Choosing a yellow pastel, he begins the background. As with the hundreds of portraits - most self-portraits - Martin has produced in recent years, Koutoufides' head will be surrounded by a colorful geometric pattern. Yellow on blue on green. He moves to the face. Black eyebrows, white rings around blue rings around brown eyes. He works on, undisturbed, never disturbed.

Martin was two-and-a-half when his autism was recognised. Pat, his mother, had taken him to the doctor because he was complaining in his own way of a stomach ache. "I think there is something else the matter," the doctor said. "Don't you?"

Autistic artist Julian Martin with his portrait of Yasser ArafatPat recalls the shock, not because she had never considered that a child of hers may be autistic, but because she had.

When her first child, her daughter, had gone through a brief phase of spinning things, her husband, Bill, had brought home literature on autism from the school at which he taught.

Julian did not spin things, but he also never spoke. He threw tantrums that became increasingly harder to control, and he clung to a small L-shaped stick not only through the day but also at night when he slept.

Most of all, he wanted order, routine, rhythm. People, with all their inconsistencies, their need for eye contact, even physical contact, people he could leave.

"They don't know what causes autism," Pat says. "All we really know is that it is some sort of damage to the part of the brain that gives people empathy with others. Julian has no empathy with others." She says this matter of factly, but then continues: "I remember the doctor asking me if he put his arms up to me and I had to say I didn't know. I'd never given him the chance. I'd always just scooped him up and hugged him and smothered him with kisses."

Martin first came to Arts Project Australia in 1990 as a 20-year-old. The Northcote-based organisation was established in 1974 by artist Myra Hilgendorf with the aim of helping people with intellectual disabilities develop skills that would allow them to express themselves in the visual arts.

It would soon succeed in having a number of artists, among them Valerio Ciccone, Alan Constable, Jimmy Fuller and Martin, exhibited by commercial galleries. About 200 people with intellectual disabilities come from across Melbourne each week to work with arts workers. Martin comes three days a week.

Cheryl Daye, the director of Arts Project, shows me a folio of Martin's very early work. The fact that so much has been kept and filed provides a remarkable insight into the artist's development. When he first came to the studio, Martin drew crude stick figures, often faceless and flat. But soon he was giving them the rounder shapes he now prefers. Gradually , the geometric backgrounds and the huge eyes and mouths emerged. But it was another two or three years before the skill and the confidence he now displays with his materials began to show.

Roth Daye and Diane Soumilas, manager of Works on Paper Gallery at Australian Galleries in Melbourne, which represents Martin, agree that he is not only a highly skilled artist, he is highly original.

Oliver Sacks, in "An Anthropologist on Mars" discusses the work of autistic artist Stephen Wiltshire, describing an extraordinary gift that was evident from the beginning but developed little. He also poses the question: "Was not art, quintessentially, an expression of a personal vision, a self? Could one be an artist without having a self?"

Martin's work is very different from the life-like drawings of this English child artist. Perhaps his autism has contributed to his willingness to repeat a style and technique, but the development in his work is more than technical. "Look at the huge eyes he does," Pat says, dismissing the notion that her son's sense of self is anything but extraordinarily strong. "When he was a child, we were always forcing him to make eye contact: 'Look at me, Julian. Look at my eyes.' He hated that."

In the studio, Martin is still working on his portrait of Koutoufides. While he has preferred self-portraits, he occasionally chooses other people as subjects - peers at Arts Project, Yasser Arafat, various beige and besuited politicians, judges. He also goes through football phases - last year's series often featuring Wayne Carey was the only indication that he was aware of his father's feelings for North Melbourne.

Most of his work remains untitled. Australian Galleries, where some of his portraits are on show until tomorrow as part of a group exhibition, defines the work with such titles as Self-portrait - Yellow Face or Self-portrait - Brown Face. Today, Pat asks him directly: "Is that Koutoufides?" She points to the photograph torn from a newspaper that hangs on his easel. He turns his head towards her, his eyes looking anywhere but at hers, and nods quickly. He stands uncomfortably for a moment more, then returns to his work.

Other artists at Arts Project have given their work such titles as "An Aboriginal Lady in a Spaceship and Our Lord and a Bird Eating a Fish" But Martin, as in all things, let us work it out for ourselves. 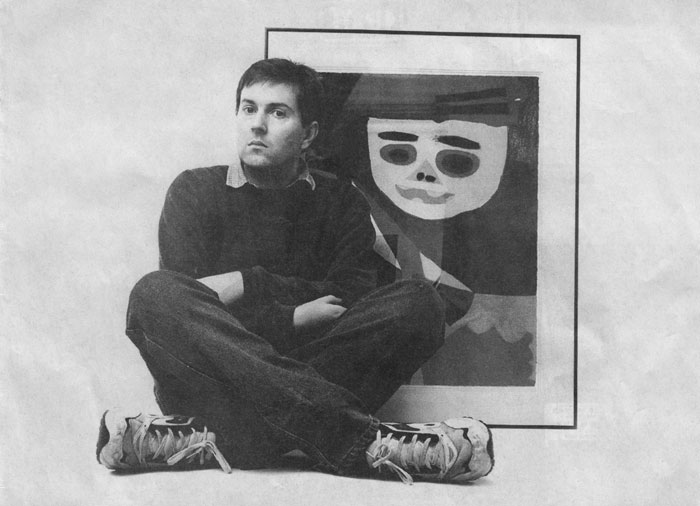 Julian Martin in front of his portrait of Yasser Arafat.