The Age, Metro Arts and Culture

ARTS Project Australia has been instrumental in starting a professional studio practice model for adults with intellectual disabilities. Two artists with long studio associations are shown in this handsome show.

Julian Martin has a capacity for abstracting the shape of the everyday into an elegant geometric formalism that must have Giorgio Morandi turning in his grave. Kitchen cutlery is arranged as an arcane alphabet that speaks, not so much to domesticity, as to the very possibility of language. Alan Connstable is the roving social historian. Working from newspaper and other popular cultural imagery, he depicts people, particularly in ensemble formation, with affectionate yet incisive comic precision. 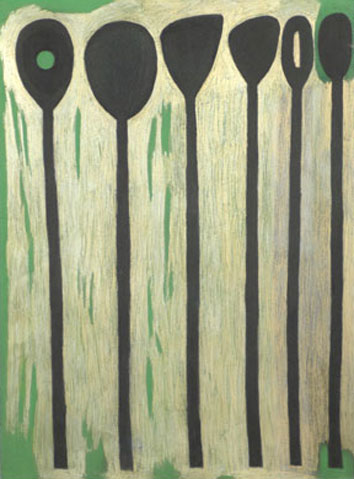