Draw: A profile of Julian Martin

His early works were abstracted monochromatic figures and profiles, and in these, a strongly idiosynchratic and original style was evident. The next phase of his artistic journey saw a series of flattened totemic figure paintings, highly coloured and framed as if trapped inside a fishbowl or television screen.

Around 1992 his work changed again as he embraced pastel, continuing with the figures, but elaborating the face, with coloured diamond shaped patterning on the body, creating an effect of jewell-like prisms. From here he moved on to what became almost his trademark or signature style - a repeated template of a mask-like face off which he based literally hundreds and hundreds of works, all different with subtle variations of features, colouring and shading. Sometimes the hair would change ever so slightly, or the number and positioning of the teeth within the ever-present grin, or the color of the face itself from a single pastel hue to daring combinations of shading. At one point Martin became fascinated with scouring the edges of the features with a compass needle so they became torn and ragged, again revealing his intense way of working and fascination with surface.

What was evident throughout this period, and remains so today, is Martin's uncanny ability to handle with deft skill and precision a notoriously difficult medium and to apply it to his highly original creations. Many of these early "faces" were self-portraits which he drew after being given a mirror by one of the arts workers in the studio. As his work developed so did his capacity for abstraction and interpretation of a wider range of subject matter. He began using visual images from newspapers and magazines as the basis for his work, bringing to these the same flattened perspective and attention to surface. These explorations were interspersed with regular returns to the template form of the face, which he would repeat sometimes for many weeks, before again exploring a new direction.

The new directions have encompassed recurring themes such as letters of the alphabet, logos, kitchen utensils and tools. Alongside this thematic exploration has been a continualy evolving approach to colour, to the point where Martin works with a very limited and highly selective range. What doesn't change is the pure matt surface that he is able to generate in his work and the cleanly edged delineations of the images. His passion for drawing is reflected in the way he is able to reduce forms to their most elemental state, so that they are purely two dimensional. There is no attempt at realism or illusion. His works are purely drawn with an unerring hand, with no rehearsal nor change. They emerge in an intense and internally-driven manner in which the pace of his output remains constant and intense.

Martin's work has been shown widely in recognised commercial and non-commercial galleries both in Australia and overseas. In 1993 Martin was a finalist in the highly prestigious Moet et Chandon Art Prize and in 2004 participated in a group show at the Phyllis Kind Gallery in New York. He has exhibited at Australian Galleries in both Melbourne in Sydney and has been regularly featured at the Arts Project Australla stand at the Melbourne Art Fair since 1994.

The work of Julian Martin is intriguing. It is sophisticated yet, in a sense, also naive. Martin has not "trained" as an artist. His is a completely personal approach to art making. Breathtakingly original, with a singular and consistent vision. Martin is an extraordinary talent. 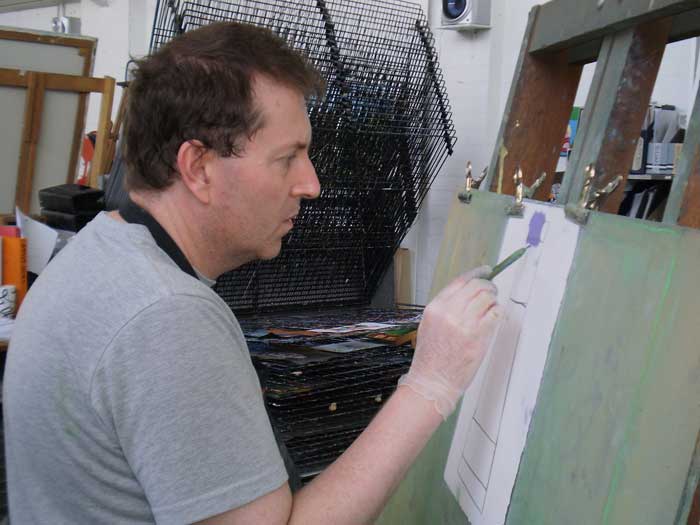 Julian Martin in the Studio.